How the Neapolitan Pizza has conquered the UK Market

Column by Giuseppe A. D'Angelo — 3 years ago 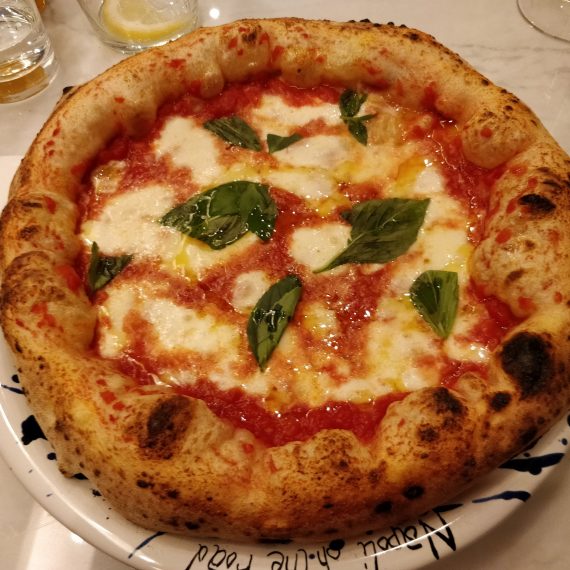 What’s happening in the UK? No clearly I’m not talking about the Brexit. If you are on this page I presume you want to read about pizza. Well, know that the Neapolitan pizza revolution in Europe has a huge role in the land of the Queen. Mainly in London.

Yet, believe it or not, in the capital of culinary trends the Neapolitan pizza (the real one, not the one many pass off as such) only started to impose itself by a few years. The first flag was planted by Giuseppe Mascoli in 2008, the year when he surprised everyone opening a pizzeria in an area, the Brixton Market, that no one would have betted on. But Mascoli had an entrepreneurial vision for his project and, thanks to the support of numerous investors, he created a huge chain which indeed has deprived the produce of any traditional character, the return to the origins he himself was looking for in the beginning. It’s been indeed a huge business opportunity caught at the right time, but a failed occasion to be the real starter of a gastro-cultural revolution.

We had to wait a few more years before other bold pioneers pushed through the varied culinary offer in London, to impose a product which was mainly unknown. A change was going to happen, and it didn’t start only from the plate, but from a mission: let the Londoners understand that the world “Neapolitan” on the shop sign (way often misspelled) or a wood fired oven were not enough to guarantee authenticity. That you need the know how, passion and especially a lot of good stuff imported from Italy.

That’s why on the menus you could start to see names like San Marzano, Buffalo mozzarella, ‘nduja… These exotic names all hid very distinctive flavours. Terms who slowly made their way in the minds, the hearts and palates of the Londoners, thanks to a passionate communication made by the Italian staff. But also, and especially, thanks to those Italian friends who accompanied them to that “good place we only know about it”, promising the dinner of their lifetime.

For a few years these small independent pizza joints were secluded in the most remote corners of London. It didn’t matter where you lived, almost certainly you had to make two Tube rides and an hour journey to have a good Neapolitan pizza. People went with their partner, or with a party of friends, to face an hour queue for a pizza that “tasted like home”. A long wait that anticipated a great experience, but which you would avoided with pleasure: yet, there were no other alternatives.

But no one, not even me, could imagine that a real revolution would have happened soon. More and more pizzerias have slowly started to pop out, covering several key points inside the M25, London major motorway. They were still small independent projects, but with a common vision: to offer an authentic product to the London community, also made of a multitude of Neapolitans who, until a few years before, had to compromise. 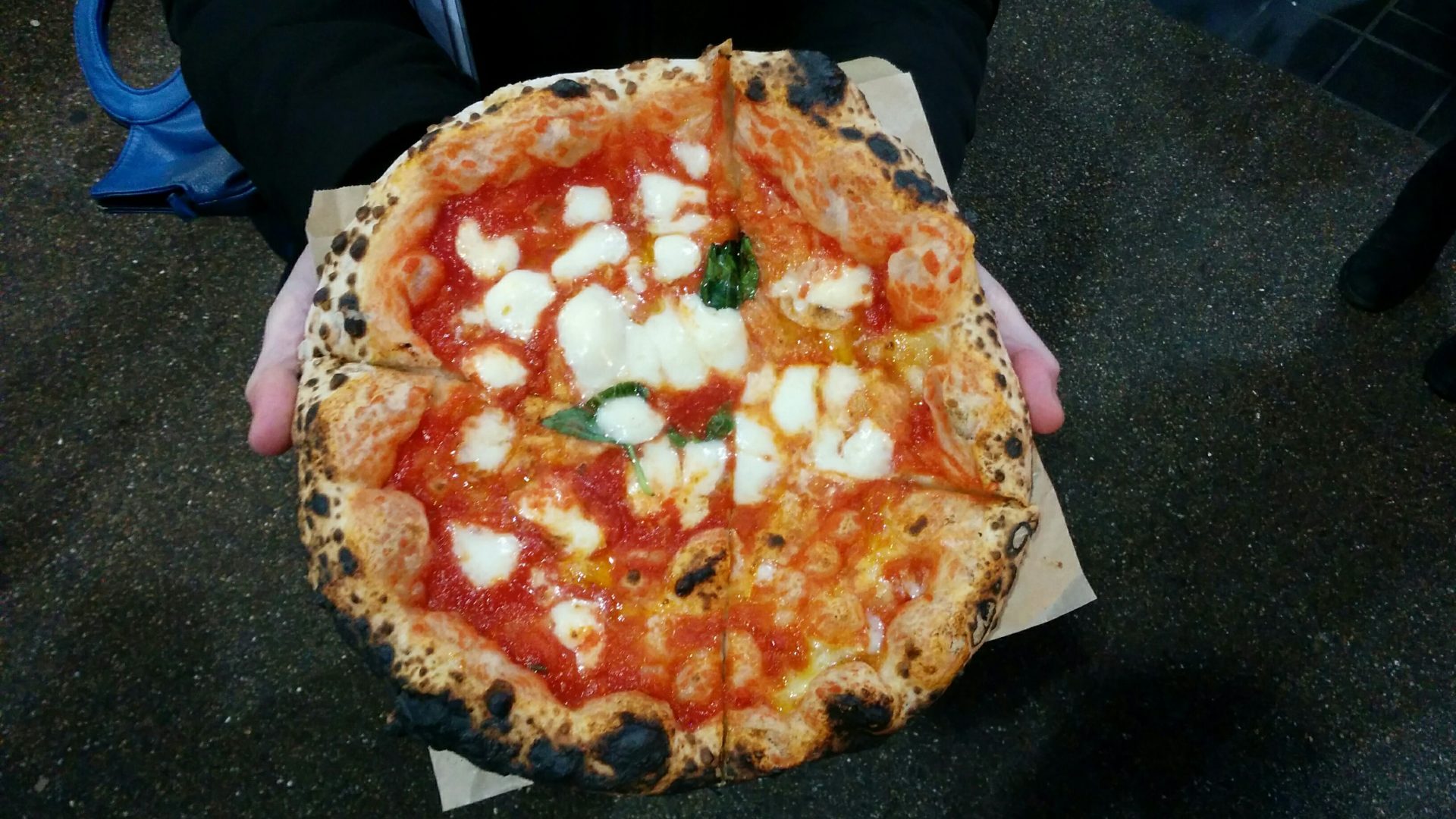 Because even if the Rossopomodoro and Fratelli La Bufala chains had already their restaurants in different parts of central London, they missed the human touch typical of the neighborhood pizzeria. That kind of place that makes you feel at home, where you always see the same pizzaiolo behind the counter, where the owner knows you, greets you, chats with you and offers you a limoncello at the end of the meal. Not a treatment only reserved to their connationals, though: indeed, their wish to explain to the Londoners the product they were importing, its history, its roots, its culture, is the starter of several banquets to secure the loyalty of a fond customer base.

The “Neapolitan” brand is not anymore an empty sign to show off illicitly. It starts to claim its identity also in the British lands. The exotic charme makes way to a more aware approach. Now whoever goes to a Neapolitan pizzeria knows already that the pizza that will be put on the table will be different from any others dough disc: a dish not only realized in a specific way, but carrying a huge cultural weight.

It may be the reason why, at one point, the English people wanted to emulate the spirit of this magical world. And they understood that not only the product, but the true daily life stories, are the ultimate source for the big money. That’s why in the food markets we had several pizza stand popping up, everyone with a common tale: “we travelled around Italy” (possibly on board of the famous Ape car), “we learned the art of the Neapolitan pizza on the spot, we fell in love with the ingredients of the Italian cuisine and we decided to recreate this feeling back home”.

Marketing strategies with an authentic flavour. True stories or not, it didn’t matter: what matters is selling. The Elliott brothers from Pizza Pilgrims have built an empire on these premises. Young face, clean smile: we liked that the Neapolitan culture had taken their hearts and they decided to make it their own, and we were happy to give them our money. But then, the number of their restaurants started to grow, and the quality to gradually decay. The initial enthusiasm was replaced by the cynicism: “that’s how the British are like, they only think about making money, they don’t care about the product”. But is it really so?

Let’s go up north. While London was living its revolution made by small authentic pizzerias spreading around the city, Manchester was approaching the Neapolitan pizza from two different fronts: from one side, there were just a couple of Italian pizzerias located in the furthest corners of the great metropolitan area; from the other side, there were the projects of English investors located in the centre, but they didn’t disrespect the tradition. An emblematic case it’s Rudy’s: between the industrial style and the Mancunian pizza makers there’s not that much of Italian in their restaurant, but their pizza is extraordinarily authentic.

The situation in Manchester has been the same for around a couple of years. Then, the explosion: in 2018 we have three Neapolitan pizzerias, totally run by Italians, opening up in the centre. This spike has actually made Manchester the second city in the UK with the major number of Neapolitan pizzerias. Yet, with the opposite process: the British here have been enough forward-looking to be the trailblazers for the Italians.

This happened in a short period of time, also very recently. But do not think this is an unusual situation. There’s a third case to study: the small town of Brighton. A seaside jewel, just an hour train ride from London, populated by 230.000 people. The phenomenon here takes origin from a city which is similar to London for being international and open-minded, but at the same time possesses the quiet and relaxed vibes of a small Mediterranean village. 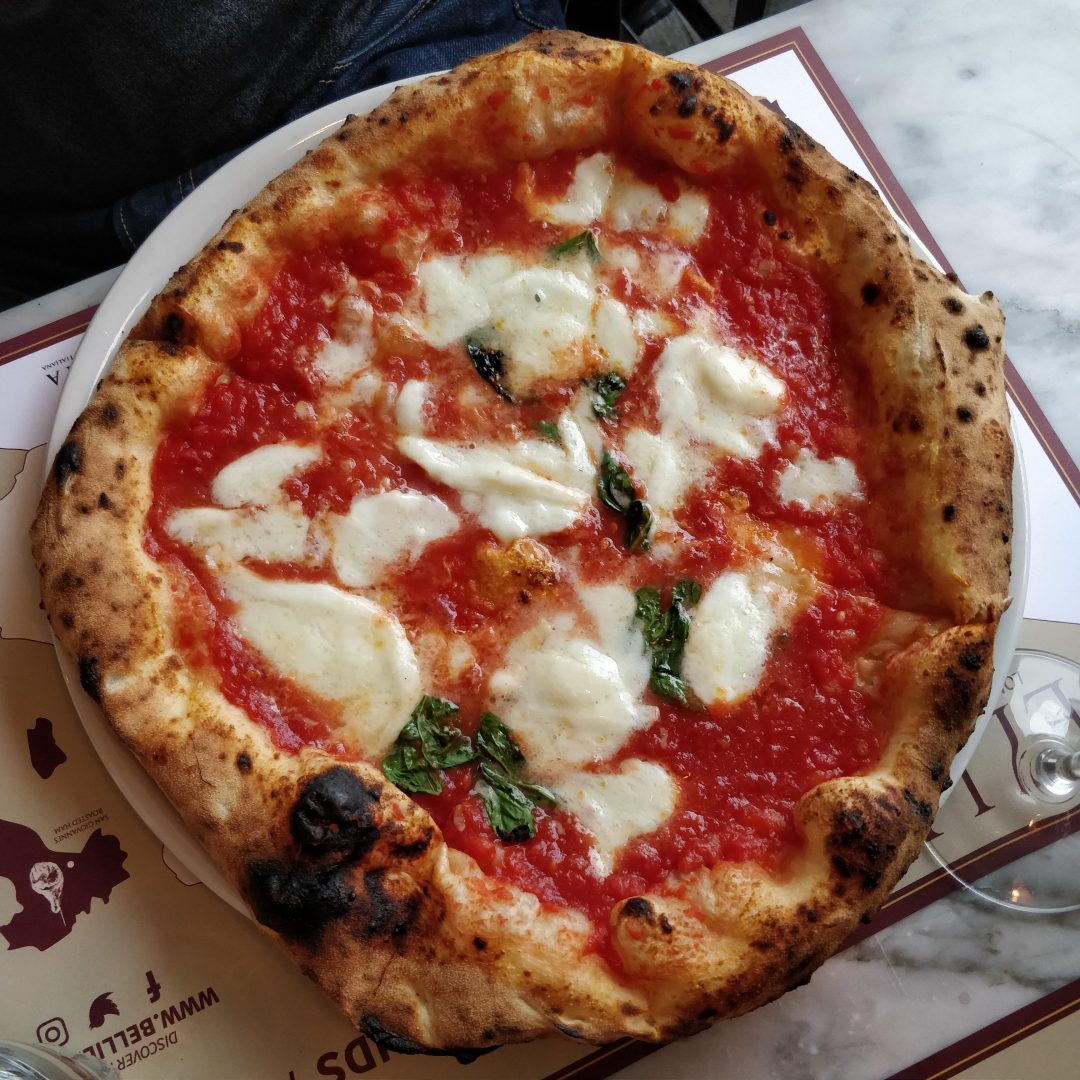 The first ones launching themselves in the Neapolitan pizza business are the guys from Fatto a Mano. A small group founded by two British guys, but with a staff made only by Italian people, today it counts three successful restaurants, opened with caution, without investing too much money altogether. Then there’s the independent pizzeria NuPosto, the result of a business – and wedding – union between a Neapolitan man and an English woman. And there’s also the vegan pizza concept brought by Purezza, which first became really successful in Brighton before opening a second venue in the Camden area of London.

Three cities, three emblematic cases. But in this country, the rise of the Neapolitan pizza don’t seem to cease. We only scratched the surface focusing on three circumscribed areas. If we have a wider look on the island we can see how Neapolitan pizzerias or pizza stands keep popping up. The southern region is dominated in the Bournemouth area by a small chain called Baffi. In Scotland, Paesano makes the inhabitants of Glasgow happy. In Herne Bay Gennaro Esposito’s pizzeria is the only one in the country certified by the Association of True Neapolitan Pizza. Giacomo Guido has taken over Chester with his inflated crust cooked in an electric oven. And then Sheffield, Bristol, Cambridge, Leeds… There is an uncountable number of places.

Uncountable is also the number of new Neapolitan pizza lovers: the second generation of pizza makers who don’t need anymore to fly to Naples and attend very expensive courses, but relies on the pizza masters on site. There are a lot of Italian pizzaioli who move between the oven and the counseling sessions. A guy like Marco Fuso, who dedicated all his life to the pizza in all its forms, with a particular inclination for the contemporary pizza, travels around the counties to hold courses and masterclasses. Only a small share of his students is italian: the passion for pizza is actually winning over the hearts of all nationalities in this country. The main incentive for learning is clearly the possibility of making a good business out of it. They ride the wave, the pizza is a safe investment.

The new wave of pizzaioli coming from these courses is going to cover around all the remotest areas of the country. Small pizza joints in the furthest villages, hardly reachable by train. Or roaming pizza stands appearing at the local farmer’s markets, which are even more profitable and less stressful. It’s an ever expanding network, which connects the other expanding network of the suppliers of Italian food and tools like ovens and dough mixers.
It’s not a coincidence that by a few years the Pizza & Pasta Show in London, the exhibition to go if you work in the industry, attracts even more people. Not just the traders, but also a general public curious to see who operates in this thriving industry, to taste the different varieties of pizzas, watch the championship that sees the participation of many pizzaioli coming from all around the UK and also big names of the international cuisine in the jury. This is a public that wants to touch the revolution by hand.

A revolution that keeps growing, but has left behind the Neapolitan origins to acquire a new multicultural identity. Yet, without forgetting its roots. Because in the exhibitions, in the markets, in the festivals, in the championships there’s always that name that clearly sounds everywhere: Neapolitan. With the word pizza, it’s an eternal matching.

Column by Giuseppe A. D'Angelo — 3 years ago
Tags: Pizza Features
Did you like the article? SHARE IT!