Levain: how to make a perfect naturally leavened pizza

The sourdough culture and its offshoot, the levain, to get a naturally softer and lighter dough. 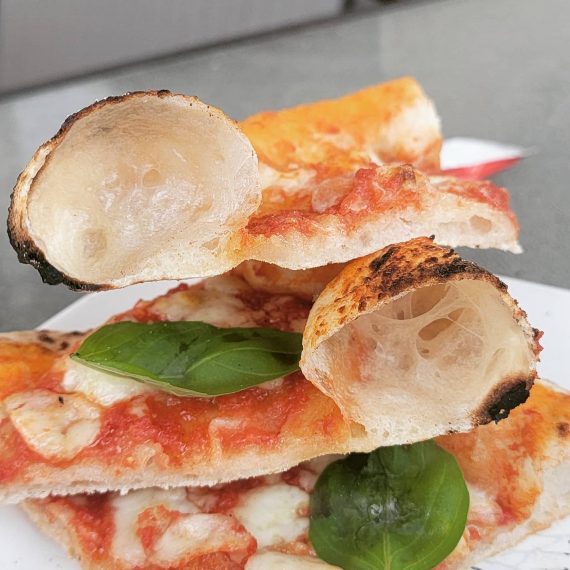 The following article is a contribution from one of our readers who’s passionate about the art of homemade pizza and wanted to share with us his knowledge to help us promote it.
Ethan Spiezer lives in Las Vegas, and his forte is the dough made with levain, an offshoot of the sourdough starter. His passion rises from a sad family episode, which will however turn into an occasion for him to retake control of his life and build expertise on this specific aspect of the art of home baking.

My name is Ethan Spiezer and 3 years ago I weighed an astonishing 450 lbs and was in very bad shape. Right before my mom passed away, she told me that her only regret was not being able to see her grandchildren grow up. This stuck with me, and I became determined to lose weight so I would be able to one day see my own grandchildren grow up. Initially, I eliminated all carbohydrates from my diet, but I missed pizza. I tried repeatedly to create a low carbohydrate pizza dough and eventually had great success.
However, one night, about a year into my weight loss journey, I decided to have true Neapolitan pizza at Jonathan Goldsmith’s Spacca Napoli in Chicago, Illinois. I realized then, that no matter how good of a low carbohydrate pizza I made, using anything but flour, water, and salt could not produce a true pizza dough. Don’t get me wrong, my low carbohydrate pizza was vastly superior to any other in its class, it’s just that once I tasted a true, legitimate, Neapolitan pizza, there was no substitute. 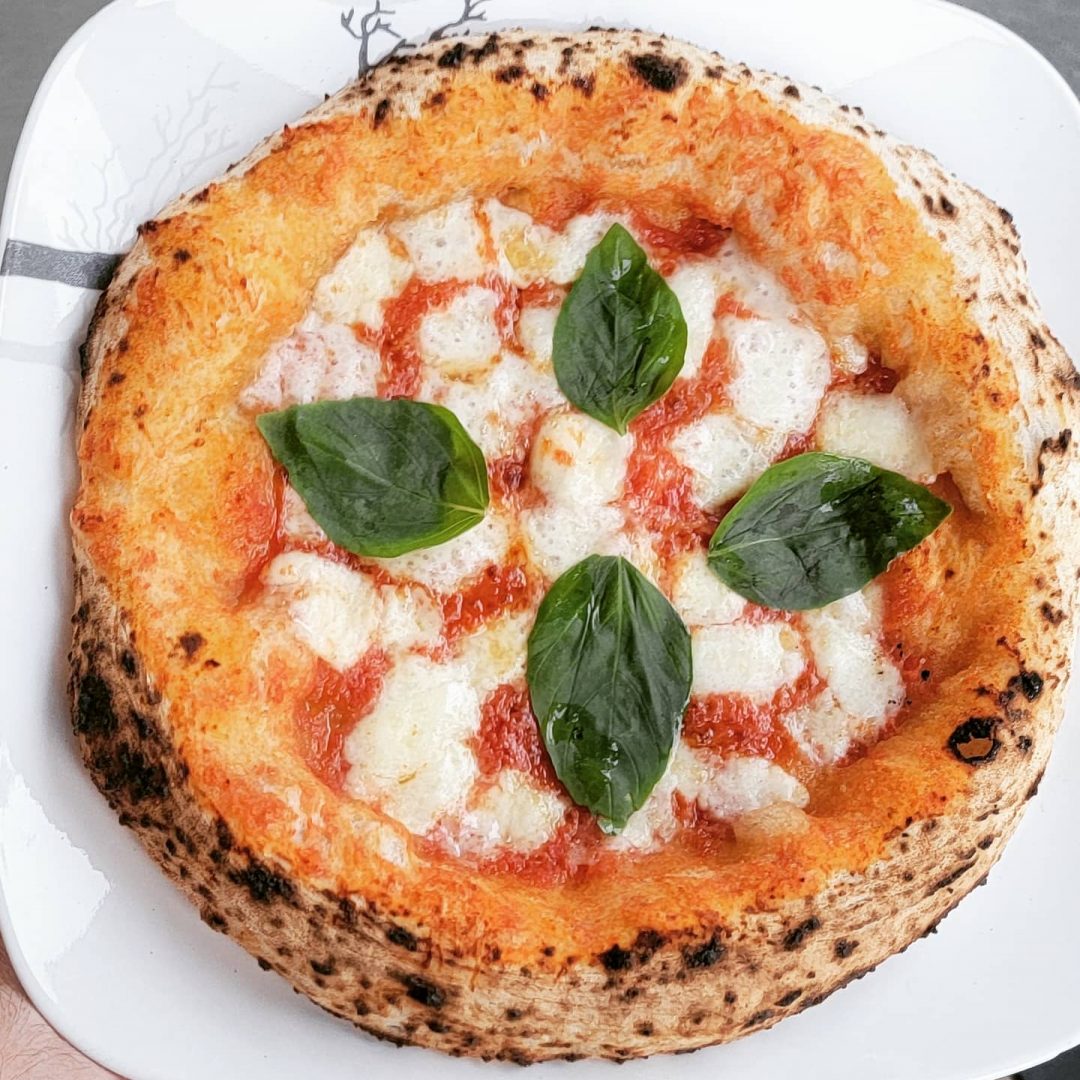 A little over a year later, and down over 200 lbs, I began feeling overly tired and realized that I wanted to increase my carbohydrate intake to accompany an increase in working out. At first, I just ate whatever carbohydrates I had around. This included things like refined sugar, high fructose corn syrup, highly processed and chemically-laden bread, etc. I gained back about 30 or 40 pounds right away and felt awful. However, I was determined to continue getting healthier without once again fully eliminating carbohydrates, I began researching and experimenting with different types of carbohydrates. I soon came to the conclusion that naturally leavened dough was exactly what I wanted to be consuming for various reasons such as the way it did not cause a spike in blood sugar or make me feel sluggish after eating it.

Naturally leavened dough receives its rise from wild yeasts collected out of the atmosphere as opposed to using commercial baker’s yeast. This collection of wild yeasts is commonly referred to as a sourdough starter here in America and Mother Dough in Italy. All one needs is water, flour, and time to create their own. I did just this and created my own wild yeast culture out of water and flour and began experimenting with it to make pizzas.  Unfortunately, it often was much too sour, sometimes didn’t have the correct texture, and was not what I was hoping to create. 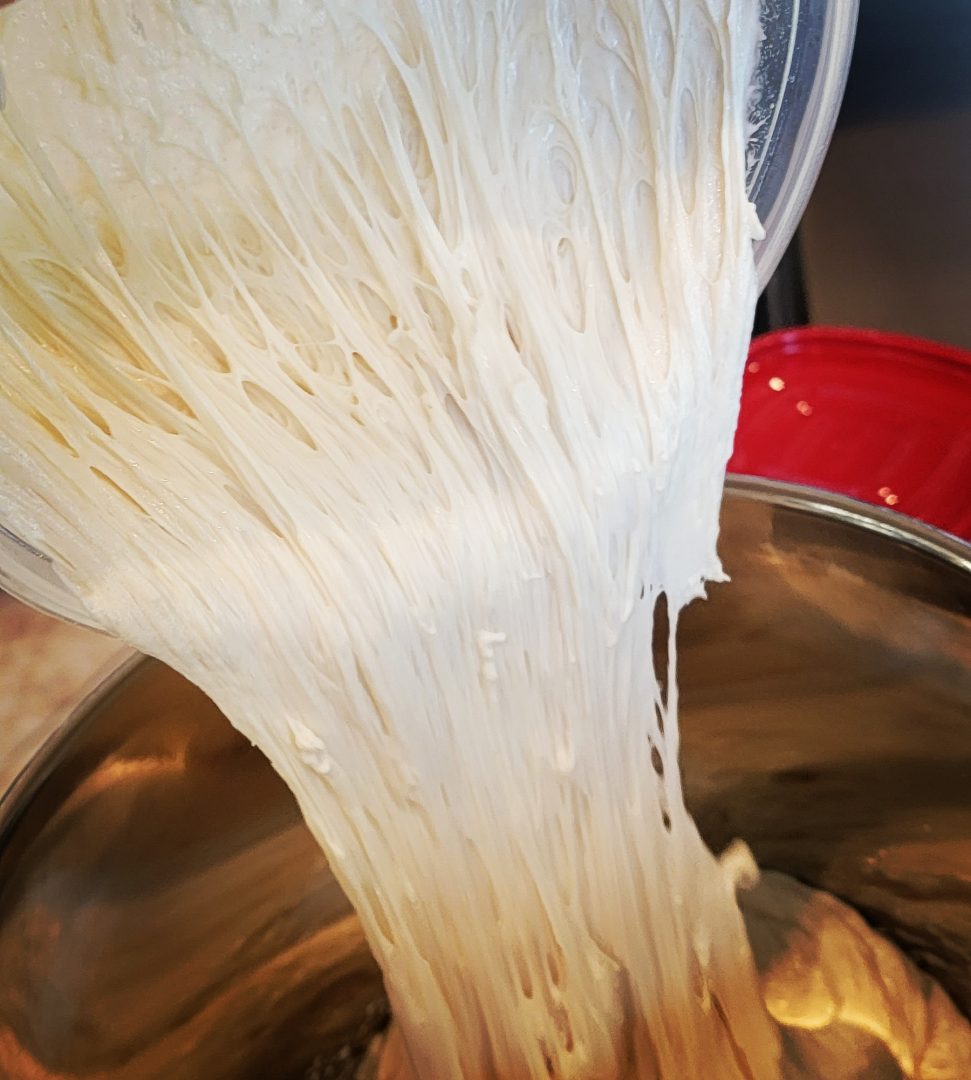 When one maintains a sourdough starter, they “feed” it regularly. When feeding a starter, one simply retains a portion of it, discards the rest, and adds more water and flour. If using the starter to make a dough, one would take some of the starter and create a levain. A levain is created simply by adding some flour and water to the starter and then, once it’s fully risen, use this as a portion of the final dough. A levain is distinct from a starter, in that at its peak, it is intended to be fully incorporated into a recipe, as the sole source of yeast, as opposed to a maintained starter or mother dough that is continually being discarded and fed.
Typically, I was using equal parts flour, water, and starter. However, when a bit of the starter is used at these feeding ratios, I could only incorporate so much before I ran into problems. It was either overwhelmed by sour flavor, would rise much too quickly (rendering it unable to develop the flavor complexities I wanted in my end result), or become so acidic and weaken the gluten structure. In addition, the texture was simply not as delicate as I had experienced at top-tier pizzas.

I noticed that in the world of bread baking, chefs used baker’s yeast to create what is called a poolish. A poolish is a pre-fermented portion of the dough or preferment. A poolish is just one type of preferment. As opposed to other preferments, a poolish is kept at 100% hydration and typically takes a full 12 to 16 hours to fully rise and reach the “peak” of its height before collapsing onto itself. This longer fermentation time would create a complex flavor and softer dough. 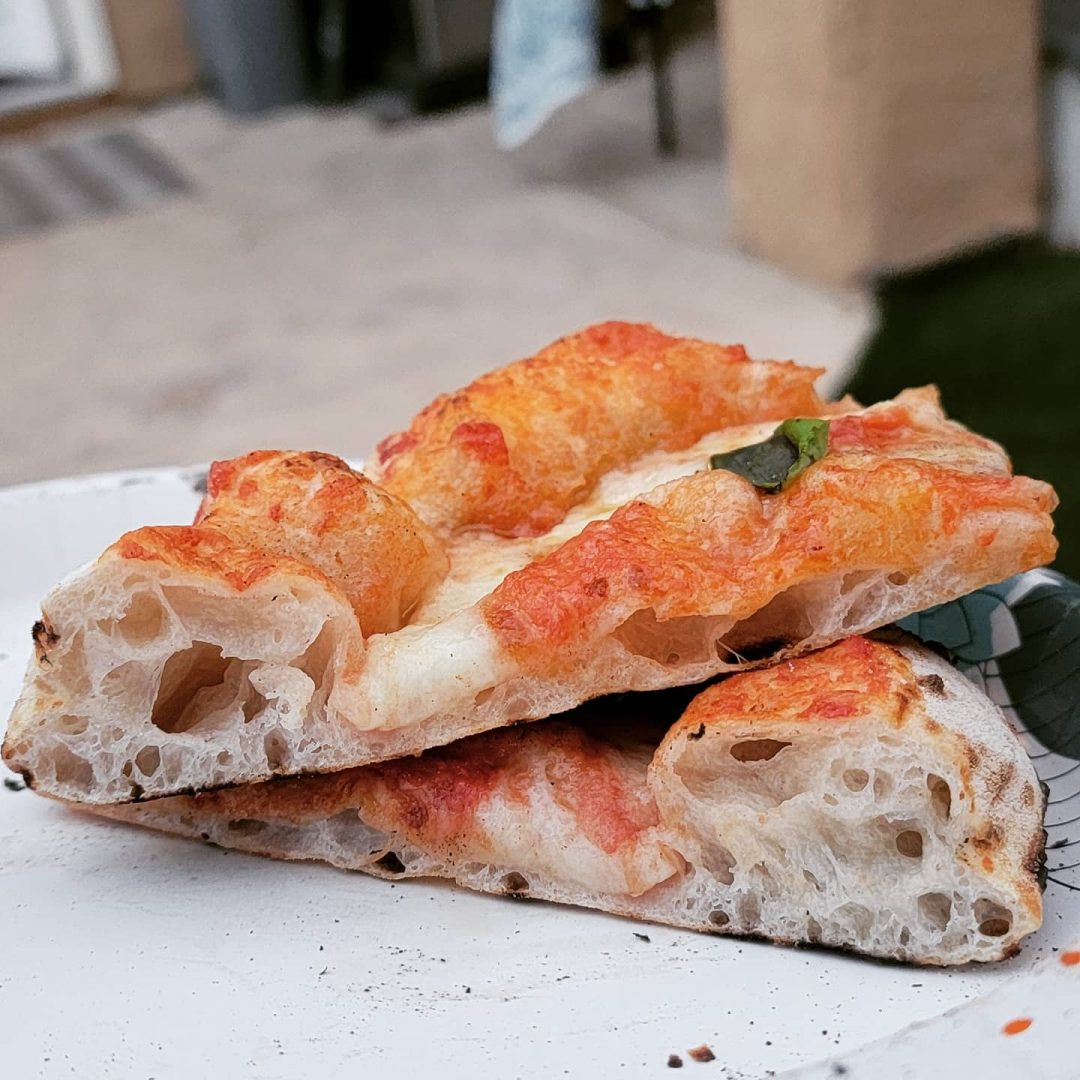 My sourdough starter levain was being built at 100% hydration, like a poolish, but because it contained a third of the starter in my formula, the natural yeast and healthy bacterias in my starter would spread, eventually run out of available food, and collapse. When bread makers created a poolish, they would use only a very small amount of yeast. So, this got me thinking: what if I were to build a levain from my starter that wasn’t a third of it, but rather, a much much smaller quality. I began experimenting and, to my delight, my levain no longer fully rose in 4 or 5 hours, but instead took around 18 hours to reach its peak. And, once fully incorporated in the dough, it produced an end result that was never sour, yet a more complex and delicious flavor than anything I had previously tasted.
What’s more, due to the small amount of starter in my levain, I could incorporate a much larger portion than I could when using my starter directly. In fact, I could more than double the amount I used without having any of the problems I had previously encountered. My pizzas were suddenly always light and soft in texture and tasted rich in complexity.

I now regularly consume a Neapolitan pizza prepared this way as part of my journey to regaining my health. Nothing quite hits the spot after a tough workout at the gym like a delicious, naturally leavened Neapolitan style Margherita pizza. 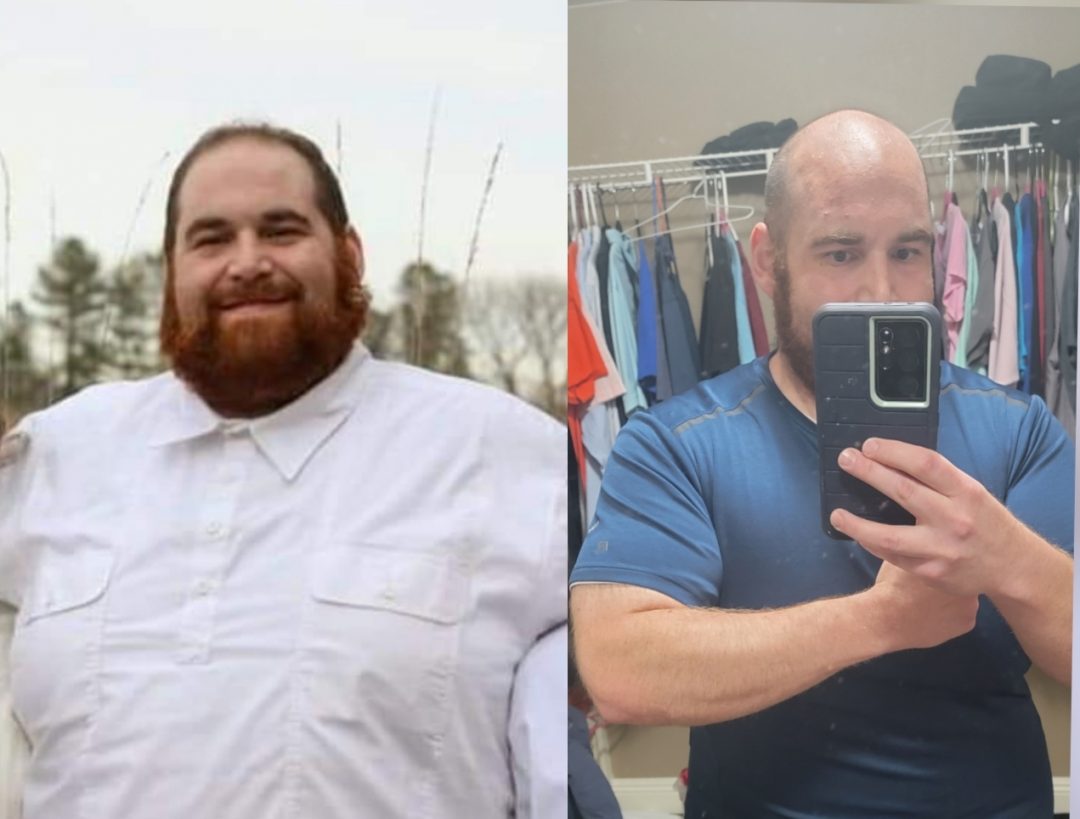 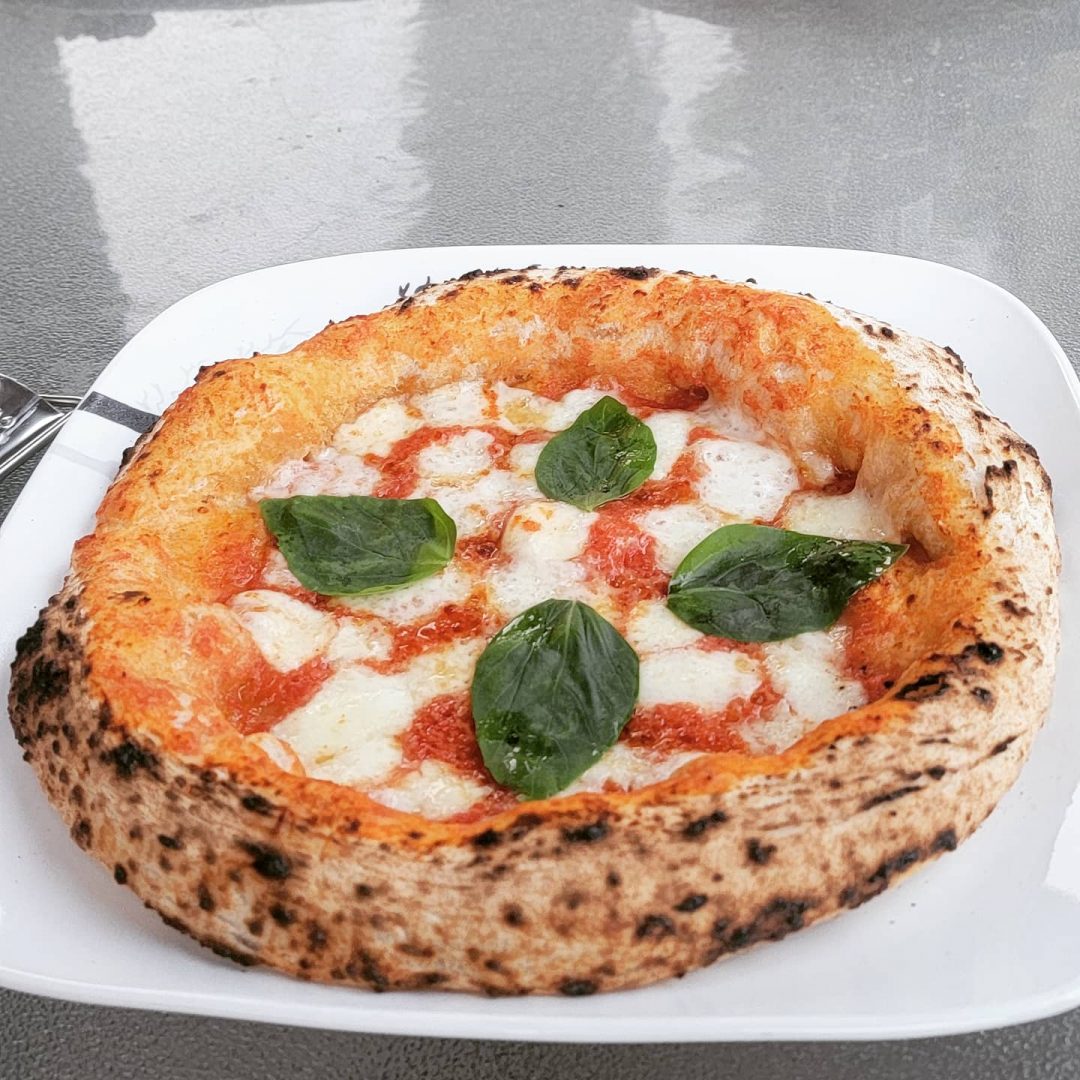 Column by Garage Pizza Bot — 1 year ago
Tags: Homemade Pizza
Did you like the article? SHARE IT!

Ethan thanks for the well-written article. I have settled into a very similar process. I make my Poolish about 12-hours in advance, using 5% starter culture. I use 30-35% Poolish (by flour %) in the final dough mix. For the Poolish, I use Caputo Chef’s flour, which I believe is Manitoba flour (W ~320). But I have used only Caputo blue-bag pizzeria 00 for the remainder of the flour. Can you comment on what you use for Manitoba flour, and also why you add the coarser ground Tipo 0 flour? is it similar to adding whole-grain flour?

On a side-note – I believe that bread/pizza dough leavened only with commercial yeast is not as easily digestible as naturally-leavened dough. This is because commercial yeast is monoclonal yeast, with no bacteria. Thus the fermentation is yeast only, producing mostly alcohols, but almost no acid. On the other hand, a sourdough culture contains various strains of Lactobacillus which further ferment the dough, producing acids and lowering the pH. This results in a more “complete” fermentation – the yeast and bacteria essentially predigest the flour carbohydrates for you, making it easier for your digestive process. Plus – it tastes better!