Maillard reaction: what is, why it’s important and how it makes pizza so good

Life and discoveries of Louis Camille Maillard, the French scientist who discovered the most famous chemical process in the world. Which explains why pizza is delicious.

Column by Giuseppe A. D'Angelo — 10 months ago 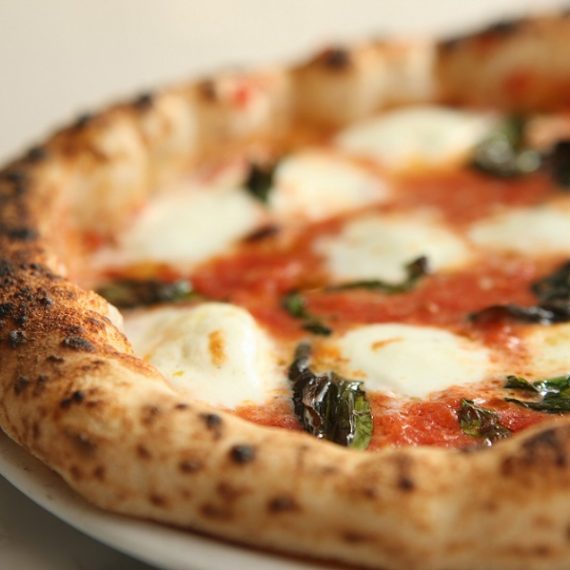 Maillard reaction: have you ever noticed that every time someone brings up chemistry in a food-related conversation it always comes up? This is no coincidence, since it is one of the most studied chemical reactions ever, with thousands of academic papers that could fill a national library on their own.
For those who have never heard of it, it is a series of chemical processes of food transformation during cooking that are responsible for the production of a complex variety of aromas and flavors. They particularly occur when cooking meat and fish, eggs, coffee and cocoa, beer, bread and, of course, our beloved pizza.

It is so ubiquitous in our daily life that we don’t even realize how fundamental it is. The Maillard reaction has been in our lives basically since Neanderthals learned to cook meat with fire. But only since the last century have the chemical processes underlying what is much more than a simple reaction been intensively studied.
Precisely since 1912, the year that saw the French chemist and physician Louis Camille Maillard publish the first of a series of articles about his studies on amino acids and sugars. From then on, the world of food science would never be the same again.

On the anniversary of his birth, we want to pay homage to this monumental scientist telling you his story, looking at his brilliant career, how he came to the discovery, and how his studies did revolutionize, and still do nowadays, the way we produce and eat food.

Louis Camille Maillard was born on February 4, 1878 in Pont-à-Mousson, a small town in Lorraine. From an early age he had shown outstanding skills in scientific subjects, so much so that he was able to be admitted to the Faculty of Sciences of the University of Nancy at the age of just 16. A few years later he enrolled in medicine, and was immediately noticed by the most illustrious teachers of the time, who saw in the young scientist a valid contribution to research: at the age of 20 he already presented an academic dissertation at an international congress in Cambridge, and at 22 he became head of department of the faculty.

Before devoting himself to the chemical studies that made him go down in history, Maillard made a notable contribution in the medical field by dealing with kidney diseases, obtaining numerous awards. But our scientist was governed by a remarkable thirst for knowledge: in his career he also studied zoology, philosophy, and was even an Esperantist. Despite this, he did not spend his entire life between the university walls: during the First World War he enlisted in the French army, even obtaining the Legion of Honor.
At one point Maillard devoted himself to studies on cellular metabolism, in an attempt to reproduce protein synthesis in the laboratory. And it was on that occasion that he published his first research on the reactions between amino acids and sugars present in cells. His paper Action des acides aminés sur les sucres: formation des mélanoïdines par voie méthodique was presented in 1912. It was the first of a series of studies on what would later become commonly known as the Maillard reaction. 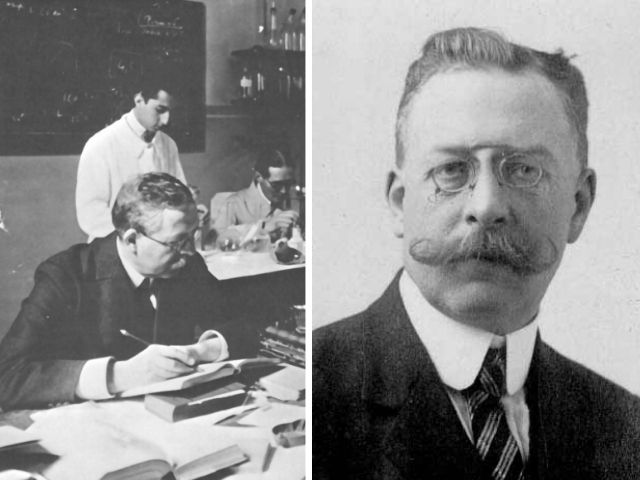 Maillard devoted a great part of his life to these chemical processes but had no idea of ​​the development that these would have in the food studies: being a doctor, his interest was mainly aimed at the use he could make in the treatment of diseases such as diabetes. It was only in the late 1940s that many scientists began to go back to his studies, using the expression Maillard reaction for the first time.

Among them, the American chemist John E. Hodge, who in 1953 published a research that became the most popular on the subject: Dehydrated Foods, Chemistry of Browning Reactions in Model Systems. Hodge outlined the three-stage process in which Maillard’s reaction takes place, and even today his paper is the most cited in studies on the subject (even more than Maillard’s himself).
The Maillard reaction is so popular that it has become almost a separate branch of chemistry: many scientists devote much of their time to studying a phenomenon that is not yet fully understood due to its complexity, and which applies to different fields of science, as well as in the food industry (the process is also used to increase the shelf life of many products).

So much so that in 2005 a non-profit association was created, the International Maillard Reaction Society (IMARS), which gathers the leading scholars in the field, and organizes an international symposium every three years. In 2012 the celebration of the 100th anniversary of the discovery was held right between Nancy and Pont-à-Mousson, the birth place of the scientist.

Among the leading scholars of the Maillard reaction, also the Italian biochemist and food chemist Vincenzo Fogliano, former professor at the Federico II University of Naples for twenty years, before moving to the University of Wageningen in the Netherlands: Fogliano has published more than 30 papers on the chemical phenomenon, and was himself president of IMARS.

What is the Maillard reaction

But what does the Maillard reaction mean, and how it occurs in cooking? First of all, we need to clarify that it is not a single reaction, but a sequence of chain reactions. These chemical processes are activated with the interaction between the amino acid chains, which form proteins, and a particular category of sugars called nonreducing sugars (there are different types, such as glucose or fructose). The processes are activated by increasing temperatures, which occurs precisely during the cooking phase: specifically starting from 120°C, and up to 180°C (between 250° and 360°F).

During the cooking time, thousands of molecular reactions are activated, and each of them contributes to the development of a different range of smells and flavors: these strongly depend on the type of proteins and sugars present in the food, but also on other factors, such as the quantity of water in it, its ph, and the micro-variations of temperature in the external environment. The ability to control such a fundamental chemical process in the kitchen is what makes the greatest molecular chefs so famous, capable of giving their dishes a variety of uncommon flavors. 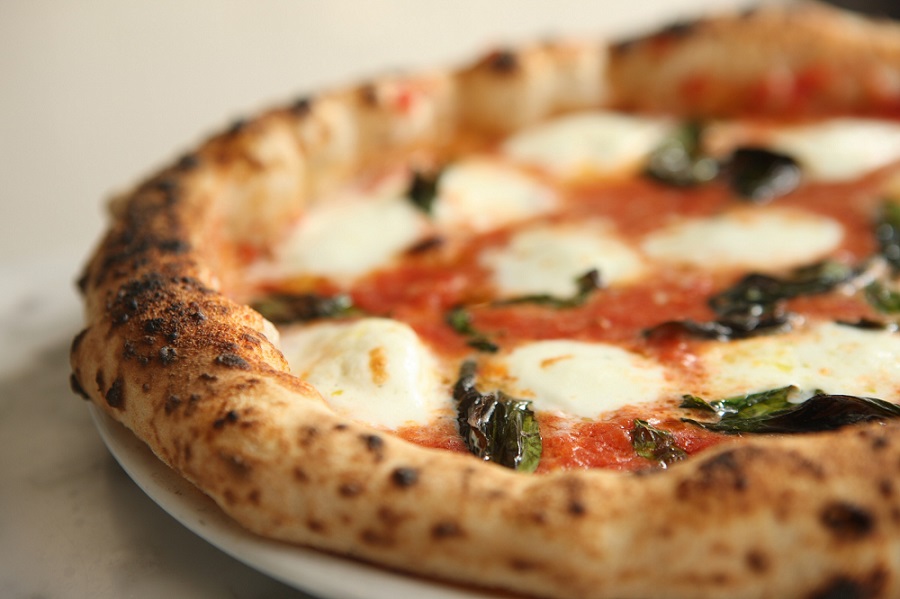 The Maillard reaction is also known for the so-called non-enzymatic browning effect: the food takes on a darker shade on the surface, not due to oxidation (like it might happen for example to a rotting apple) but due to the molecular alteration caused by the increase in temperature. Among other things, this activity is not only reflected in the way in which light is reflected, changing the color of the food; it is also responsible for that delicious crust that is generated on meat or, in the case of bread, for the transformation of the external part from soft dough to a crust.

And here we need to clarify a fairly common misunderstanding: the Maillard reaction has nothing to do with the caramelization of the sugars which are credited with giving the pizza’s rim that amber color. Or, to be more specific, they are not the same. In fact, these are two different chemical processes, although with similar results, and for this reason they are often confused.
The Maillard reaction occurs at high temperatures with the interaction between proteins and sugars. Caramelization, on the other hand, occurs only in the presence of sugars, which react with water when heating increases, starting a process called hydrolysis. Also in this case the reaction develops intense aromas and flavors, as well as changing the color of the compound that will be created. Caramelization can occur in conjunction with the Maillard reaction, and it is precisely the combination of these two processes that creates a combination of aromas and flavors that influence each other depending on the amount of sugars and proteins present in the food.

In pizza, the most obvious example of the Maillard reaction is in the coloring and formation of the external part of the dough: the crust.

Be careful, though: because if the temperatures exceed, not only will the browning turn into burning – due to a further process of breaking down the compounds called pyrolysis – but they will also begin to produce the mutagen agents, chemical compounds which could be harmful (in large quantity) for health. Among these is acrylamide, which is reported as a potential carcinogen. Although studies conducted on humans have provided limited and inconsistent evidence of the increased risk of developing cancer; whereas, animal studies have shown that exposure to acrylamide can increase the likelihood of its occurrence. For this reason, it is recommended to reduce exposure to these agents. That, and the fact that nobody likes a burnt pizza.

At this point you might ask: but if the Maillard reaction occurs up to 180°C, and beyond that temperature it produces harmful substances, how is it possible that this can happen safely with Neapolitan pizza, which is exposed to temperatures over 400°C (more than 750°F)? The answer lies in the fact that the dough contains a high amount of water which, when evaporating, absorbs a lot of thermal energy by keeping the product at a lower temperature than the environment in which it is cooked. 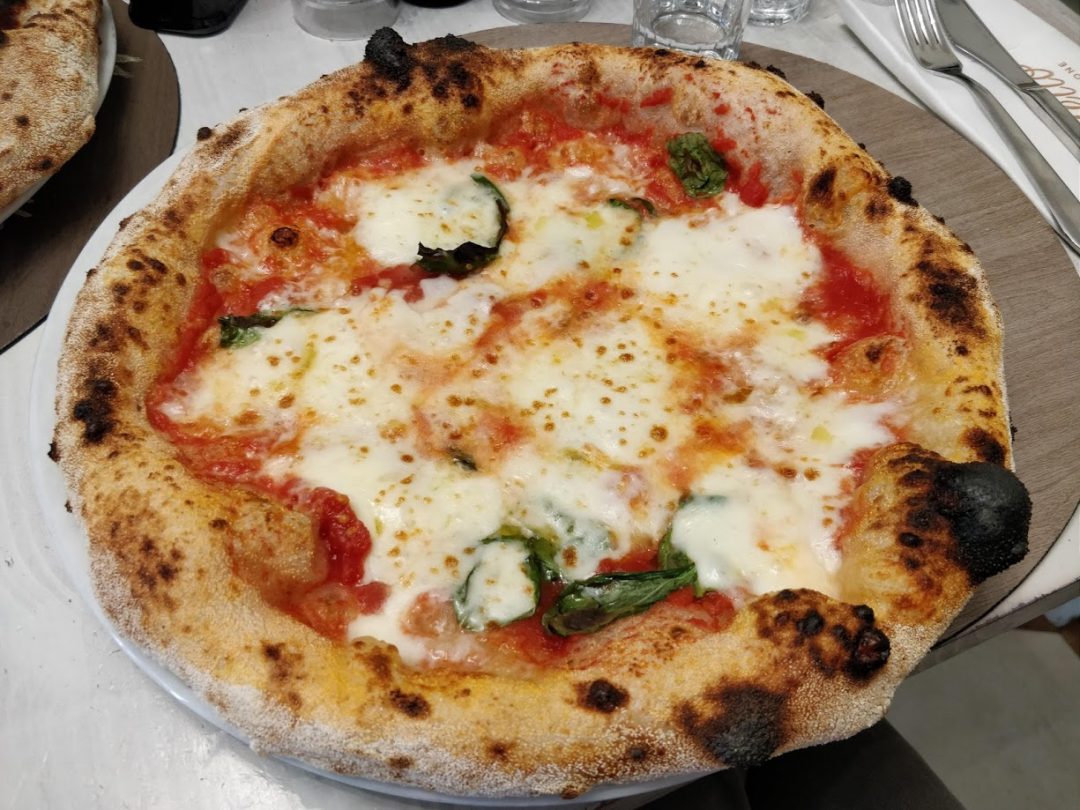 A side effect of the Maillard reaction is also the creation of unesthetic dark spots on the mozzarella: that is in fact nothing more than the browning effect occurring because the cheese used still has excessive amounts of lactose or galactose (other reducing sugars). Lactose is a disaccharide composed of two monosaccharides: glucose and galactose. Generally, in the mozzarella production process the level of these sugars is reduced with the fermentation of microorganisms that eliminate glucose from lactose, and then the remaining galactose is washed away. The process is never fully complete, and leaves residual quantities of sugars: when these exceed, the cheese tends to “burn” in the oven.

Behind the name of a reaction so often mentioned in conversations about pizza actually hides a world made up of complex chemical processes, which even trying to summarize in two words would not do justice to the number of studies that have been carried out in various fields. Here we tried to give a small overview. Our intent was to pay homage to Maillard, a great scientist whose figure and life are perhaps not as popular as those of other characters who have made the history of science. But whose name has been on everyone’s lips for over a century. Literally.

Column by Giuseppe A. D'Angelo — 10 months ago
Tags: Pizza Features
Did you like the article? SHARE IT!