Pizza and Wine: Yes We Can!

you really can enjoy drinking good wine with a good pizza

Column by Manuela Chiarolanza — 3 years ago 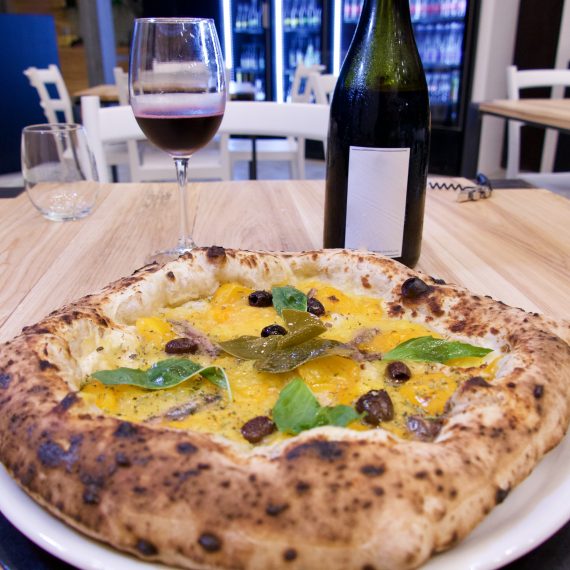 The first mention of a “real Neapolitan pizza”, as we think of it nowadays, appears in a book by Francesco De Bourcard at the end of ‘800s, when Naples was the capital of the Kingdom of Two Sicilies. In “Habits and traditions of Naples and its surroundings described and portrayed” there’s a mention of the prototype of a Margherita pizza, with only mozzarella cheese and basil. The tomato is still optional, whereas for the other toppings, as the book states, “you can use whatever comes into mind”.
Then the Margherita became more common and with this pizza, turned into a symbol of the Neapolitan people, wine was the drink of choice, because at the time that was the most widespread beverage, if not the only one, on the Italian tables.

However, the pizzerias of the time didn’t have the licence to sell alcohol, so numerous wine cellars started to spread nearby them, and from their store, they would bring the half liter of house wine to the customers’ tables.
Only in the 50s, a special licence to sell alcoholic beverages (under 8 degrees) was given to the pizzerias, and this favoured the popularity of the beer as the drink of choice since it was way cheaper than the same amount of house wine.
The pairing between pizza and beer became the most popular one in spite of wine, as now everyone, even the less well-off people, could afford to dine out and have a drink. 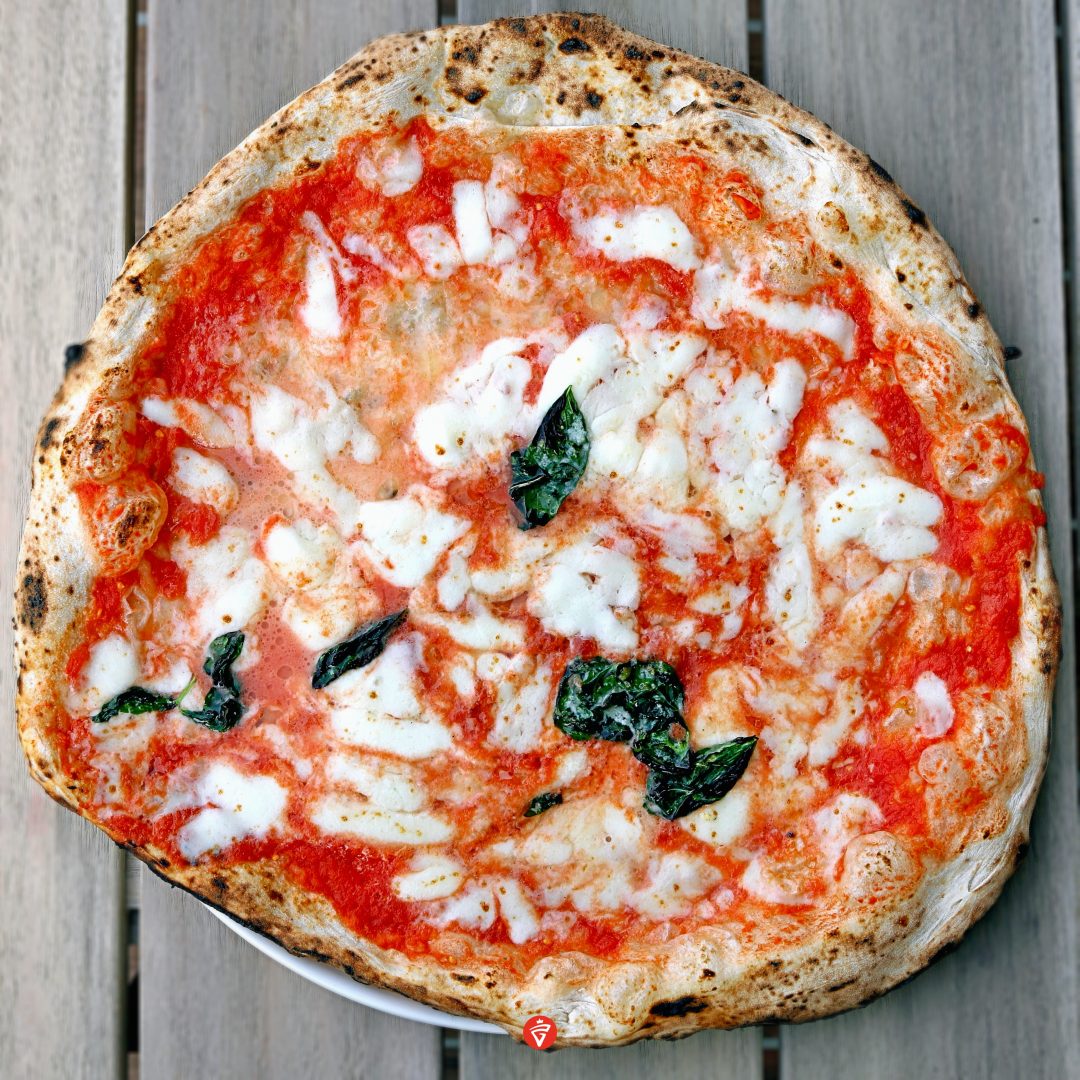 The principle of Pairing

But in this article we want to talk about Bacchus’ drink: pizza can be paired with wine exactly like any other food, following the same general rules: i.e. the same criteria of contrast and similarity which lead to the balance between the perceptions of food and wine. Contrast, because some perceptions coming from food even out what lacks in wine and vice versa; similarity, because in some cases the perceptions keep the same rapport, the same characteristics. Pairing food and wine means to seek a balance from the point of view of their structure. If a wine is too open, intense and persistent, pairing with a “poor” food will completely dominate it. On the other side, if the wine is too weak and light it won’t add anything more in terms of taste and smell.

We need therefore to try and understand all the useful factors to create harmony. To better understand, we need to begin from what happens in our mouths when we eat and what we perceive on our tongues thanks to our taste buds. We define taste as the set of perceptions felt in the mouth, which are tied to the flavour as well as olfactory, tactile and thermal stimuli.
The taste perceptions due to the proper flavour are four: sweet, salty, sour and bitter, which are perceived in different parts of the tongue: the sweetness on the tip, the bitterness on the back, the sourness and saltiness on the sides.
To this, we have to add the fifth taste, umami, which represents the “savoury”, a sapid taste not yet perfectly coded for the pairing, but that we can recognize when we eat products rich in glutamate, an amino acid present in high-protein foods, like the Parmigiano Reggiano cheese, the Parma ham, and the meat, but also in numerous vegetables. In your mouth, you can feel salivation, astringency or pungency, so it is possible to perceive contrasting flavours. Even the time range and duration are different: the sweetness, for example, comes after a second, whereas the bitterness after around three seconds, but for longer.
Some compounds combine with saliva blocking the lubrification of the whole mouth: the feeling that comes with it is called “astringency” and is due to the tannins, especially present in the red wine. The tongue is also able to perceive the shape of a substance, if there are solid particles or if the food is more or less dense, liquid or creamy.

All these perceptions combine altogether and affect each other. Every food has its prevalent feature which, once spotted, allows us to choose and pair the right wine. Such features are, for example, fatness, sweet tendency (not to be confused with the sweetness due to the sugars, but it is present in produces like bread, cheese, potatoes), succulence (caused by the presence of liquids during the prepping – like the braised meat, for example – and also by the salivation produced during the chewing of some foods like bread and cheese), greasiness, sapidity, and others. 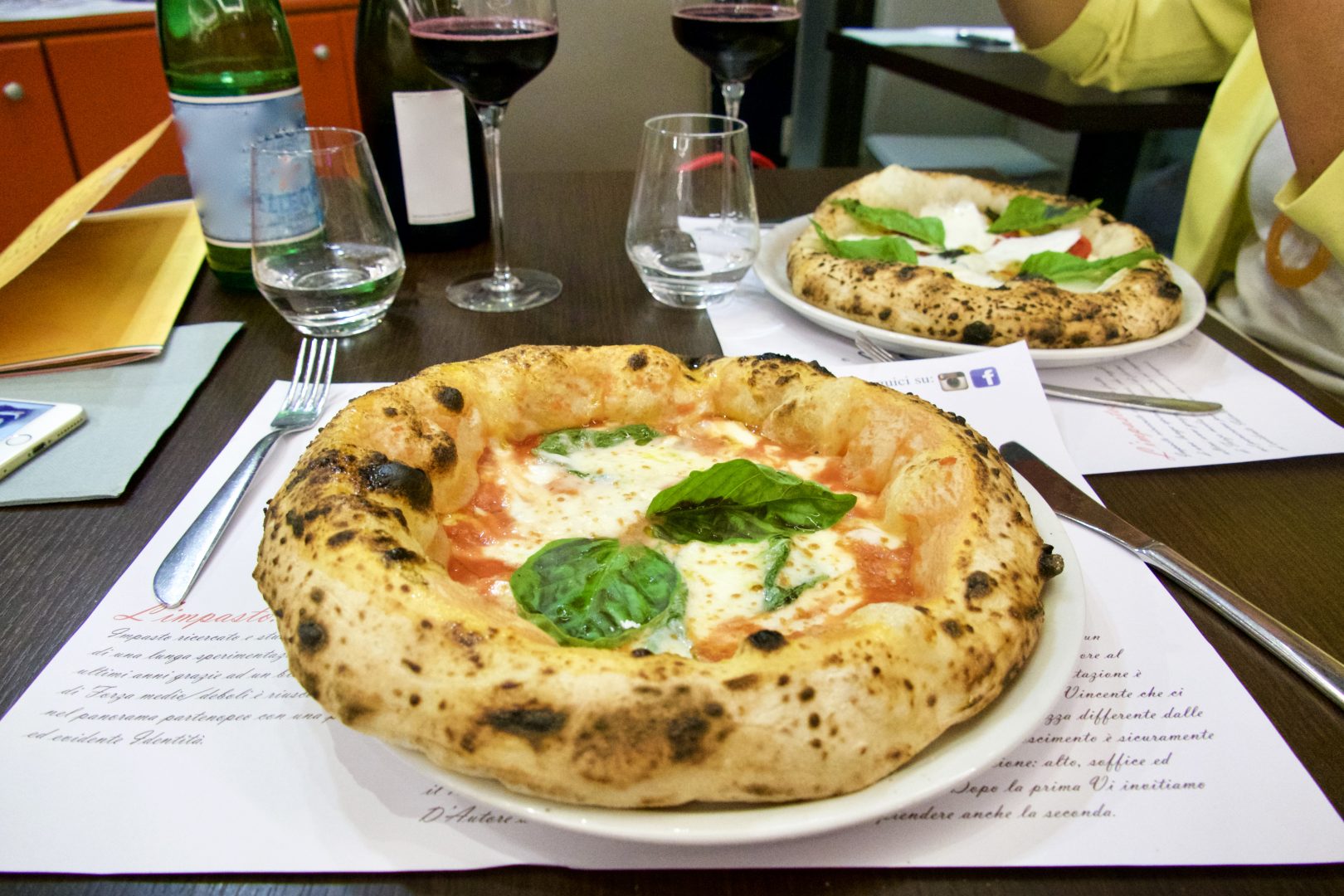 The AIS (Italian Association of Sommeliers) has prepared a technical sheet where all the features of the wine and the food are described, and they are quantitatively evaluated with numeric values, which have to compensate to create the balance of the taste. This sheet is of course only a tool useful to help us in the choice of the pairing, as we first have to trust in our taste and what happens in our mouth.
For example, taking into consideration some wine features like acidity, effervescence, and sapidity, we can find the right match in the food for the perceptions of fatness and sweet tendency. In fact, the acidity is a degreasing feature, while the sapidity contrasts the sweet tendency because wine with a good sapidity makes the pairing more pleasant if a portion of food is bland. Alcohol and tannin have especially dehydrating features, as they take away liquid from the mouth, therefore they contrast the succulence but also the greasiness, which even if it’s viscous is still liquid. More specifically, alcohol plays an important role in the succulence as the tannin for the greasiness. To all of this, we need to add two important factors, that is the olfactory intensity, and the Intense Aromatic Persistence, which is the set of sensations that remain after deglutition and that fade more or less slowly. To be clear, the I.A.P. has to be considered when we have to choose a wine to balance those flavours which are strong and long-lasting, like the onion flavour. And so on. 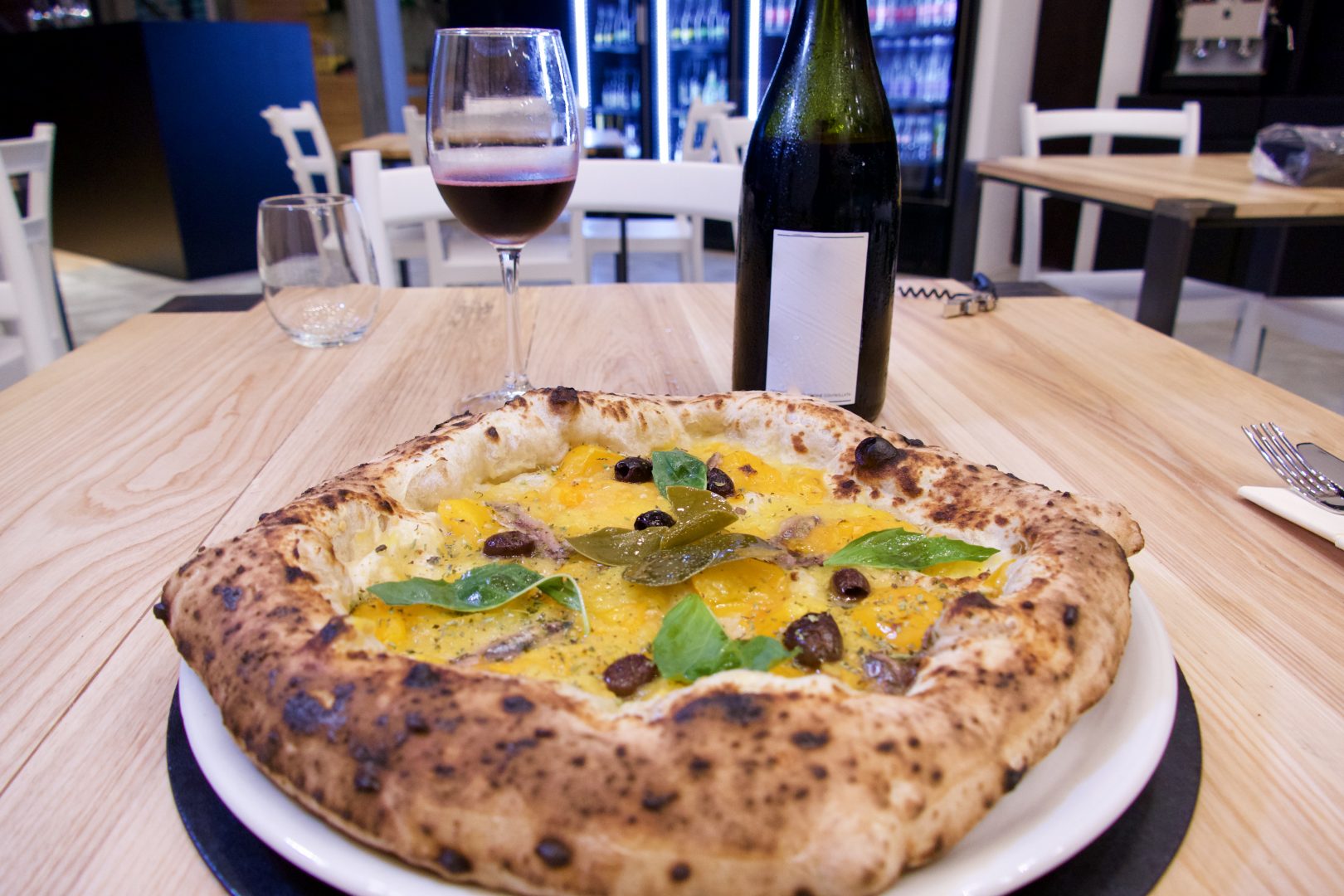 Pizza, and more generically the modern cuisine, has become lighter in terms of rising, proofing, ingredients, prepping and cooking. Thus the need for wines which are easy, agile and not too alcoholic, which therefore don’t weigh down the food, also looking at a tasting where the types of wines are constantly changed, and it’s easy to go from bubbles to a rosé, from a white to a red wine according to the pizza served on the table.
Generically speaking, pizza is a food with a very pronounced sweet tendency – due to its dough and the almost constant presence of cheese – more or less structured (we begin with “simple” pizzas such as Margherita and Marinara, to the point we get to toppings and prepping which are more elaborate, and also different ways of cooking), where it’s easy to find the acidity of the tomato, the aromaticity of capers, the slight bitterness of the black olives, the sapidity of charcuterie and so on.

According to the aforementioned principles, for fried foods (both pizzas and starters) a bubble is more than fitting, both sparkling or fizzy, as it’s degreasing and contrasts the high sweet tendency.
For pizzas where tomato is present, it is better to choose a rosé, a fizzy red wine, like Gragnano or Lambrusco, or a firm light-bodied red wine, like for example Piedirosso dei Campi Flegrei, Rossese di Dolceacqua or a Pinot Noir. With white pizzas, the best pairing comes with acid and fresh white wines, like Falanghina, Verdicchio or Chardonnay, which are good to contrast the fatness of cheese.

In this first article, we have given general notions to better understand how to choose a way to pair food with a beverage, along with some suggestions based on what’s your tolerance about what happened in your mouth when you start to eat. But there’s only one truth: the personal taste wins over everything. Everyone is free to eat and drink what he likes, without necessarily following specific guidelines or knowing pairing techniques, and only choosing according to its heart (better, to its stomach) and the context around.

Have a good pizza!

Column by Manuela Chiarolanza — 3 years ago
Tags: Wine and Pizza
Did you like the article? SHARE IT!