Pizza Street Food: the perfect combo in Italy and UK

many Pizza places are born only with this option in mind

Column by Antonio Fucito — 2 years ago 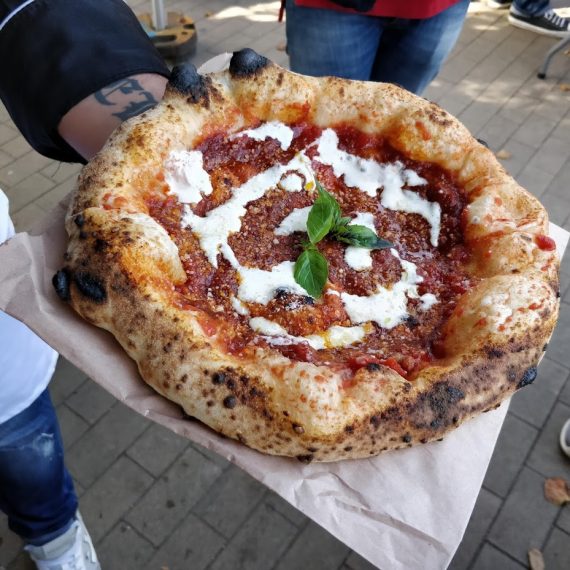 “Takeaway” is an English word commonly used in any other language every day, thanks also to the spreading of the American fast food chains and the food delivery start-ups. This concept is now universally applied to any kind of meal. But way before Deliveroo and UberEats, way before McDonald’s and Burger King there’s always been a meal that was meant to be prepared to be eaten around or at home. It’s again our favourite food ever: pizza.

If we don’t consider the latest years, which have seen the rise of several prestigious pizzerias, not so long ago you couldn’t find a pizza joint that didn’t allow also take away orders. It’s actually true the opposite: whereas all the pizzerias have a takeaway option, you also have other pizza places that are born only with that option in mind. It’s a safe business, that eliminates the staff costs and maximize the revenues. This is true in Naples, all around Italy and in the rest of the world.

After all pizza is way more popular in its takeaway version: whether you like a slice Roman style, or the so called “pizza a portafoglio” made in Naples, there’s no child coming out of school or a clerk leaving his office who has not bought a cheap slice to calm down the empty stomach on the way home.

Pizza is street food in its quintessential form, thanks to the simplicity of its prepping and the fast consumption, and above all thanks to its reduced costs. It’s no wonder it’s taking place in the food markets all around Europe, especially in this period when we are seeing the discovery of a large international culinary culture everywhere.

In Italy you can buy a slice of pizza or a focaccia almost in every pizzeria or bakery, and basically have it everywhere. It is not that obvious abroad. In many European countries the street food is confined in proper spaces created on purpose: street food markets, that’s it. 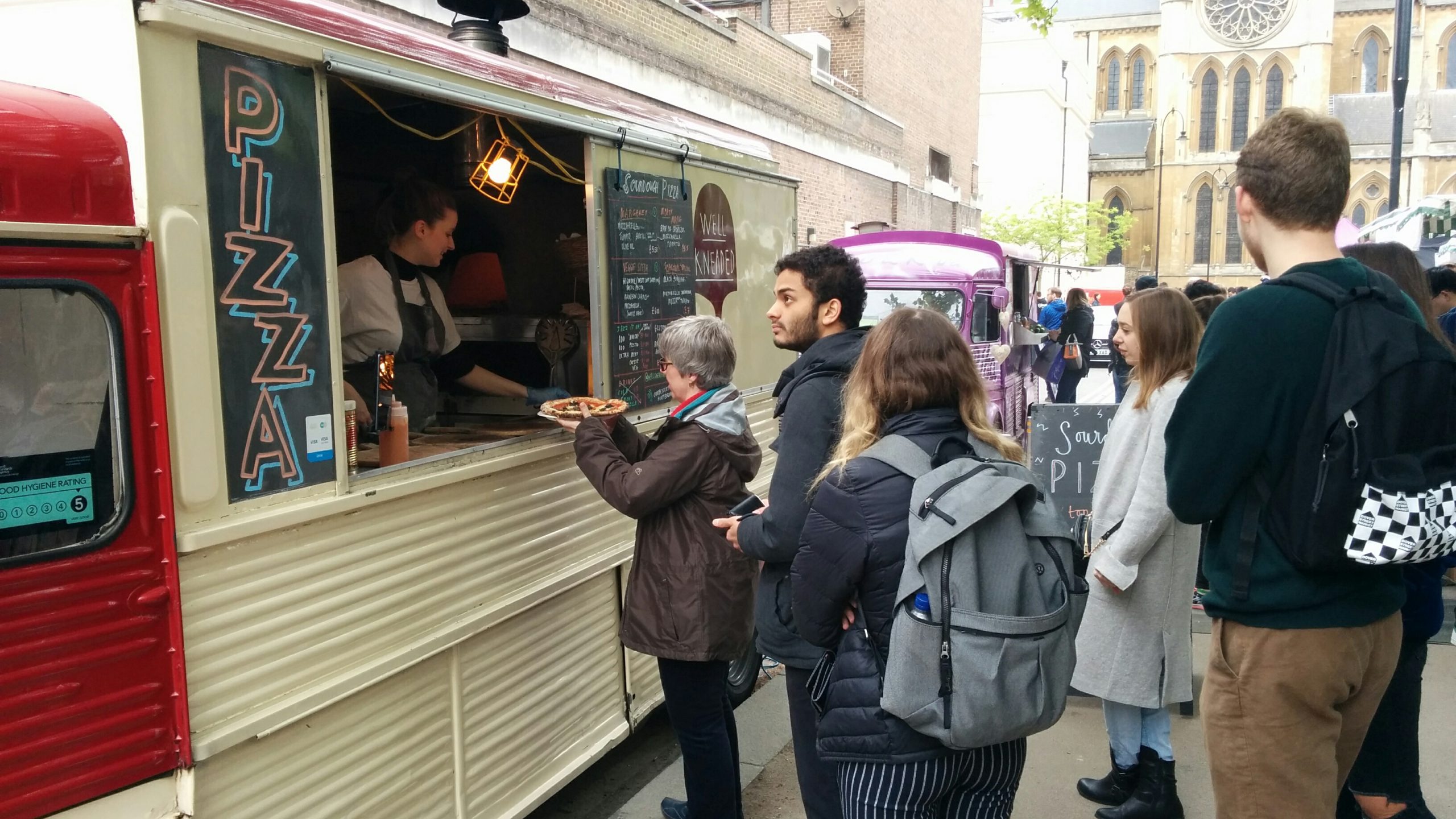 In these markets pizza has found a good ground to impose itself as favourite food of the passersby. Especially one kind of pizza: the one that follows the Neapolitan style. Round shape, with a moderate size, a more or less inflated crust – according to the philosophy of the pizza maker – foldable or to be cut in four slices with the wheel. And it’s made in a variety of recipes which either follow the tradition or take inspiration from the best use of the local ingredients.

But why this particular kind of pizza, you may ask? It’s a good question: the Neapolitan pizza is definitely not the easiest one to replicate abroad. The dough requires a long proofing, the kneading needs the hand of a skilled pizza maker, and even for the cooking it’s necessary to have proper ovens. So why indeed should anyone wanting to try the business of street market not choose another food that requires simpler techniques and tools?

It’s a topic that can be analyzed under many points of view, but which I’d like to simplify with two single concepts: marketing and culture.

I’d like to focus on the second, first. Because this is exactly the reason why we are observing a viral diffusion on the Neapolitan pizza in the markets around Europe, thanks to the Neapolitan pizzaioli who has lived that culture since their childhood. Neapolitan people have, historically, always migrated abroad, bringing with them their arts and skills. One of the crafts that has always been the easiest to export is the pizza making, as this food is universally beloved, regardless of the style.

But it is also true that many Neapolitan pizzaioli start their career very young, and their art and culture basically defines their whole life, just like it was a sort of second skin. Neapolitan people in general are obsessively proud of their origins and never forget their identity anywhere. But if you are a pizzaiolo born in Naples, you will even have that job identity branded onto your heart. 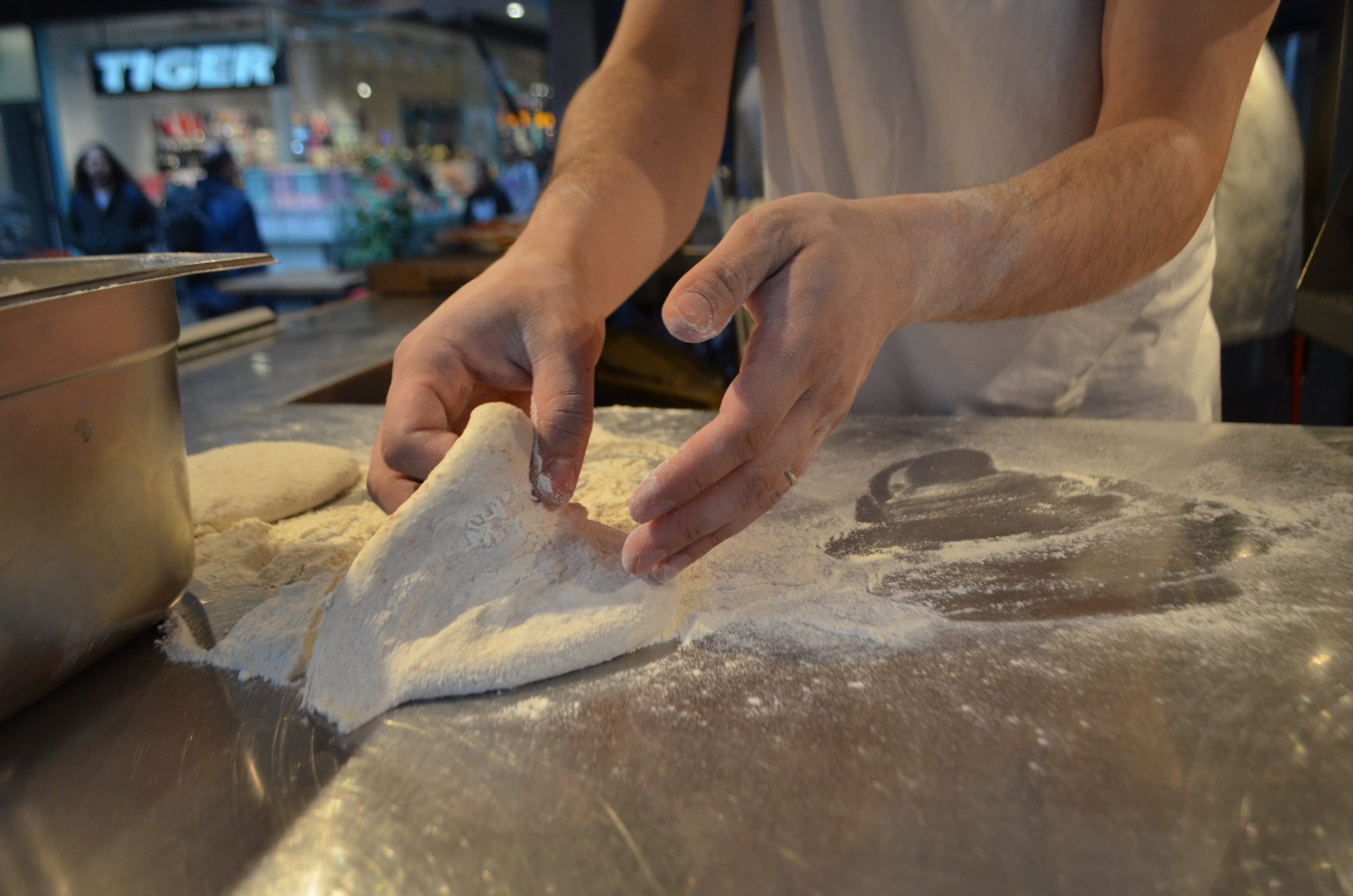 Sud Italia, working on the dough

The pizzaiolo with an entrepreneurial mindset will soon understand that abroad it will be more profitable selling his own pizzas than working for others. And, since, in many cities opening a pizzeria would require a high investment without any guarantee of profit, the street food option appears to be more appealing. That doesn’t mean you don’t spend a lot of money for your presence in a market, as in cities like London this could be pretty expensive too. But you are definitely more visible there, than with a restaurant that risks getting lost amidst the others in your neighbourhood.

And this leads us to the second concept: marketing. It is true that the word pizza can attract a lot of customers; but those same customers in a market are also attracted by other strong competitors. It could be a stand where they make fresh pasta. Or a seducing Spanish paella. Some smoking gyoza. The proper food markets sell any kind of food. How can you compete just with a pizza?

Well, that’s because pizza, in its Neapolitan version, is not so anonymous. It’s clearly visible in the way its prepping it’s shown off all the time. How can you not be charmed by that harmonic hands movement that flies the dough ball from the box to the counter, starting its soft massage followed by the rough slapping? How can you not be fascinated by those ample arm gestures, when the pizzaiolo moves the ladle around to pour the tomato sauce, or when reaches out for the toppings in the boxes? And how can you not admire when he promptly lay over the paddle that dough disc so thin but at the same time so full of ingredients, only to rapidly move it towards the oven and retract it immediately with a quick movement?

Also, how can you not be excited knowing it will only take a bit more than a minute to see your pizza cooked and handled to you pipin’ hot? Neapolitan pizza is marketing by itself: it doesn’t need any kind of particular publicity, because the very making is an essential part of the selling process. A process that is completed when that charred, spotted disc, with a well leavened crust and the bright colours appears in its form in front of your eyes.

But the real entrepreneur knows that even a good product is not enough by itself to attract people’s attention. That’s how “Neapolitanity” comes into play, to express the pride of its artisanal identity. Some play the folklore card, starting to sing loudly some popular songs from their country while they’re working. Some others study the “acrobatic pizza” game, to juggle around fake or even real doughs and entertain people with their moves.

And then, there are some selling tricks that come straight from the Neapolitan school. Some pizzaioli just give away their pizzas for free so people can taste them and buy more next time. Some others have used the old formula we call “a oggi otto”, often used in the past in Naples where it meant “eat your pizza now, then pay it next week when you will have money” (and will most probably buy another one as well).

But another solid point for the promotion is the oven itself. And not just that, but everything that is built around it. Because street food often means pizzaioli travelling around the markets to sell their products. And they need wheels, very often three: the famous three-wheeled Ape Piaggio car is the most popular transportation means used by the Italians selling their food abroad. It’s one of the major symbols of Italy by itself, and when you use it to sell pizza is even better: mounting a big wood fired oven and a retractable counter is something that sure attracts the attention of the passersby. 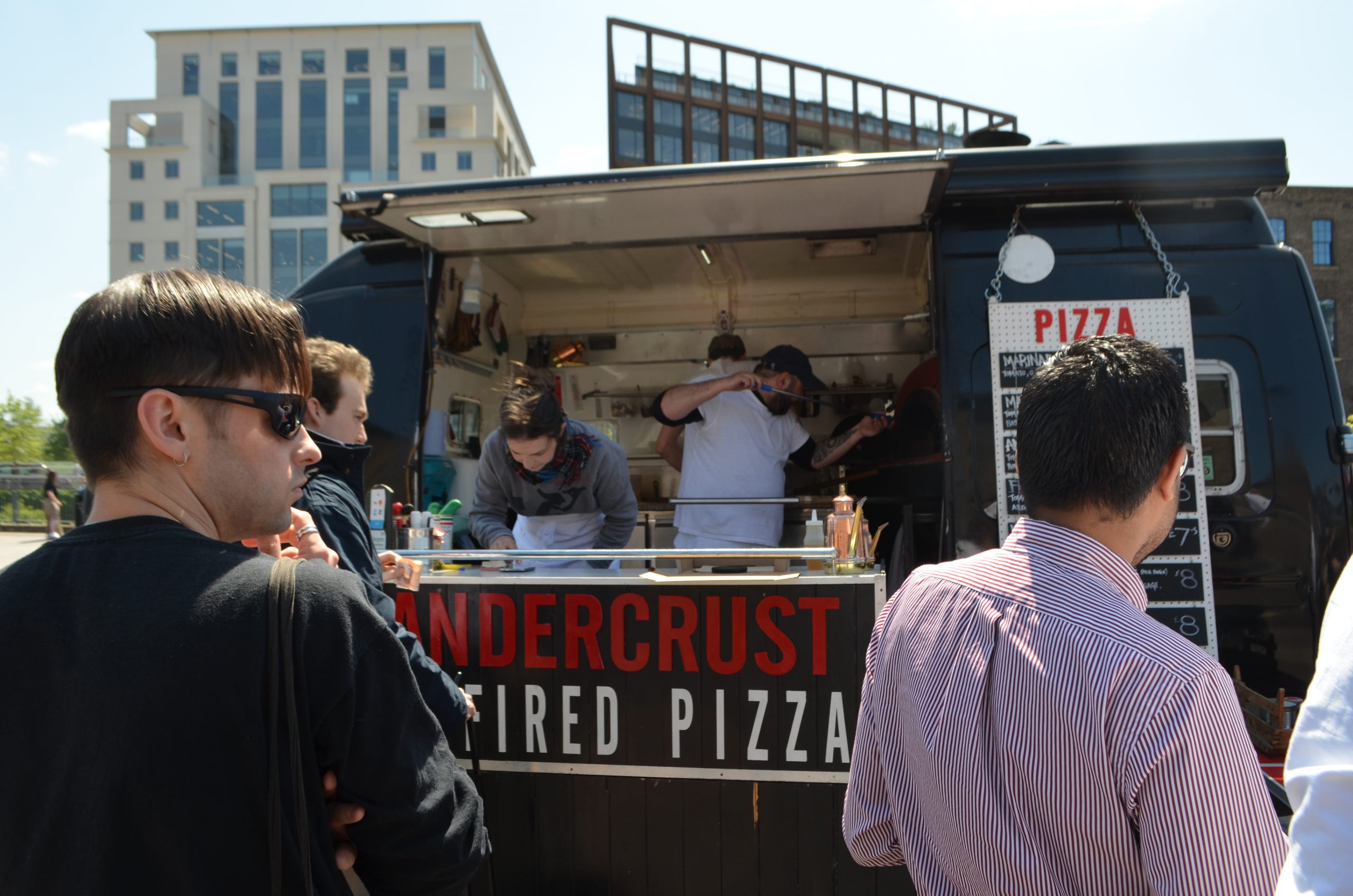 Several companies have based their business model on the production and export of this atypical means. They differ widely. Sometimes big vans are used so that pizzaioli can work inside and be covered by the harsh weather conditions of the North European countries. Many of them opt for bright colours – often the light blue which is a remainder of the colours of both Napoli and Italy football teams – or the big picture of a pizza to attract the customers. Some others go for an ecological approach and give up the fueled engine for a good peddling: you can indeed see around small ovens built on bikes.

Do not think, though, these businesses are only undertaken by Italians. New generations of pizza makers are rising abroad. Thanks to the consulting of Italian pizzaioli that work in those countries, the art is passed to people that definitely have not a big pizzaioli family behind them, but surely has something in common: they want to make people happy with a tasty product and make good money out of it.

This phenomenon, as we have already discussed, is largely taking place in the United Kingdom, where this centuries-old art is being learned everyday by many people in the country. Many of them start with a self-teaching approach: the new pizza makers learn online watching YouTube videos or even fly to Naples to take a masterclass. But now these courses are held directly by master pizza chefs in their country, and this has facilitated the art to be spread and the rise of new small pizza businesses. 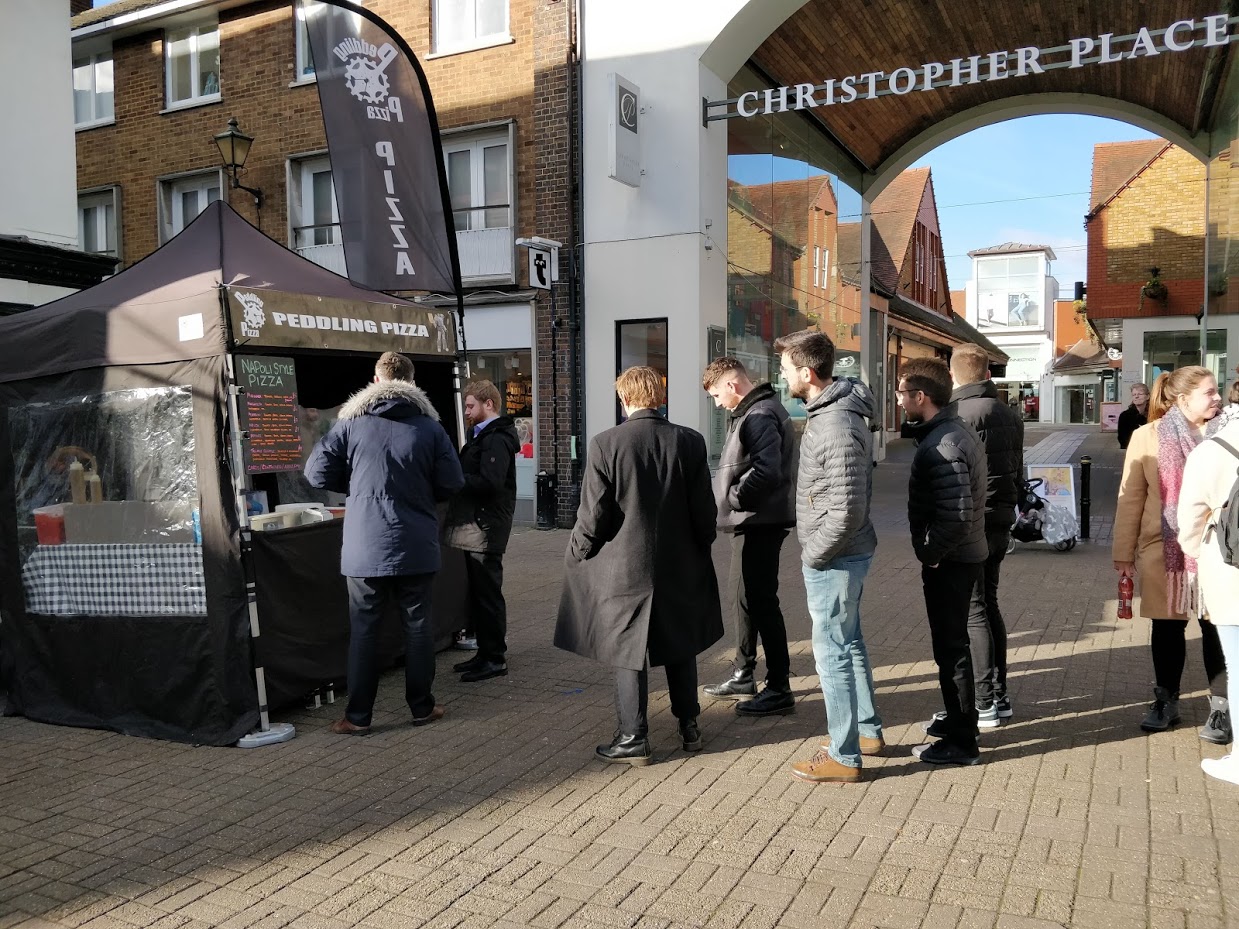 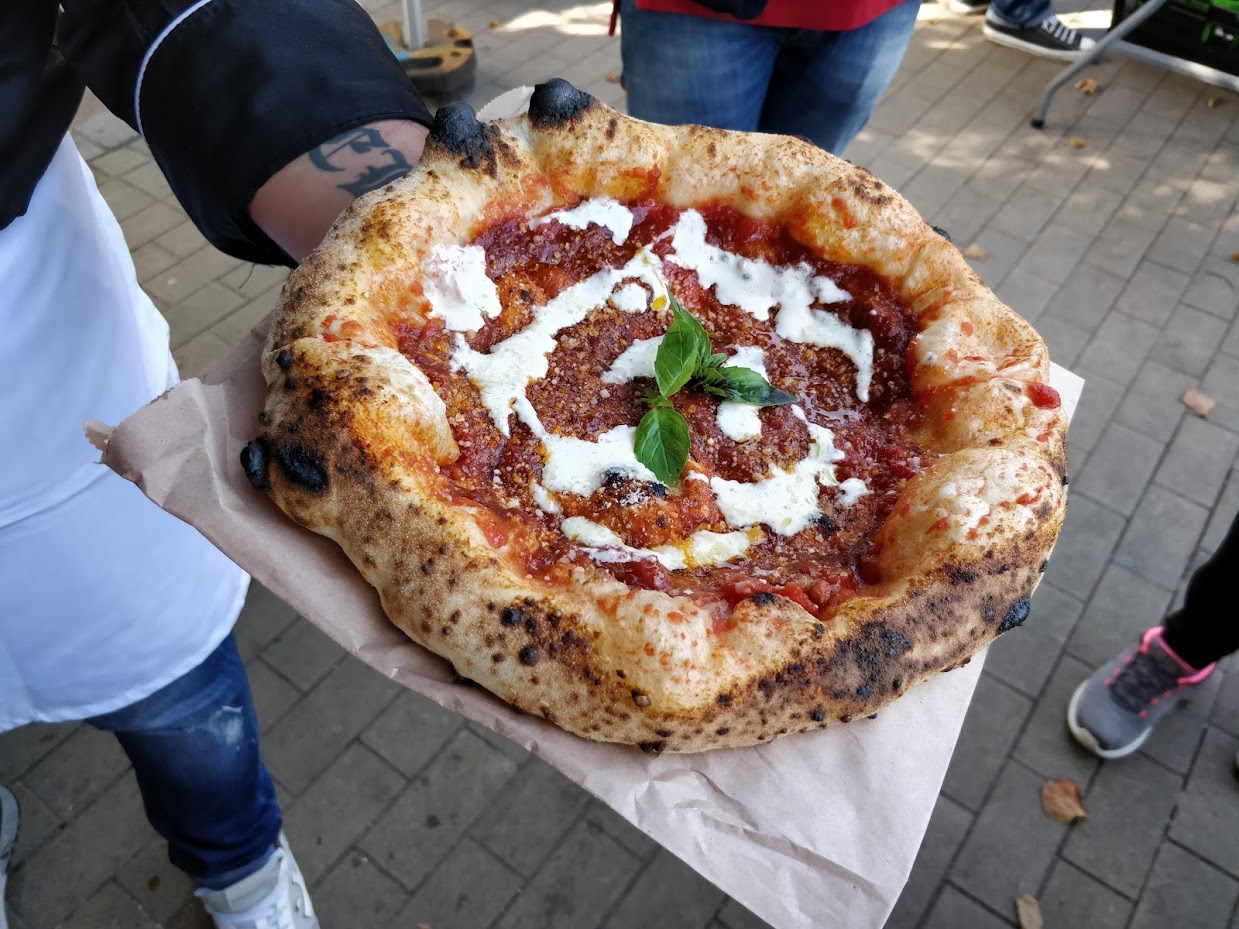 Napoli On The Road

In the United Kingdom these businesses are now scattered a bit everywhere and they keep popping up. The same process is slowly happening in other countries like France, Germany, Poland where the street food culture is less prominent, still the Neapolitan pizza is winning over the earths of the people. In a way this whole thing mirrors how the borderless European Union helps the mixing and spreading of different cultures: from my side I love to think pizza sa a unifying link among our people.